In the last 25 years, the world has seen a technological revolution. And we in Siemens Workers Union have been a part of it. Twenty five years ago, most of us did not have a landline or a television. Computers were unheard of. Now most of us use only mobile phones; television has become a necessity and the internet is changing the way we work and communicate. 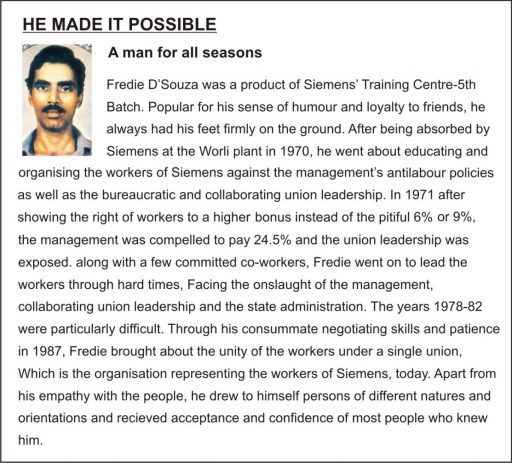 As we keep pace with the changes around us, our union is also getting more youthful. We are not 25 years older but 6 years younger. The average age of workers at SWU has come down drastically from 54 years in 2005 to 48 years in 2012 with the influx of young workers since 2005.

With the youth, the internet defines social relations. They use the internet to chat, job hunt, read, listen to music and watch videos, and… voice dissent.

The Internet is without a doubt the fastest growing medium of communication. In 2011, out of the world population of 693 crores, 227 crores are using the internet– a staggering 528% increase over 2010.Internet provides the best platform to express opinions, share experiences and extend support to workers across the company, the industry, the country and the world and will also ensure that SWU members are up to date with all the developments. Internet connectivity, coupled with mobile phones, is a very powerful tool to bring about better communication and better awareness among members and thereby strengthen the union.

Members can share their views on different issue through our blog. The community forum will enable us to debate and discuss issues. With SWU having international connections, our workers can interact with workers across the globe.

From textile workers in Egypt to Honda workers in China, the internet is being used as a medium to communicate, organize and build solidarity. The internet has given workers across the world a voice and freedom of speech and expression. We hope all of you will make the best of it.