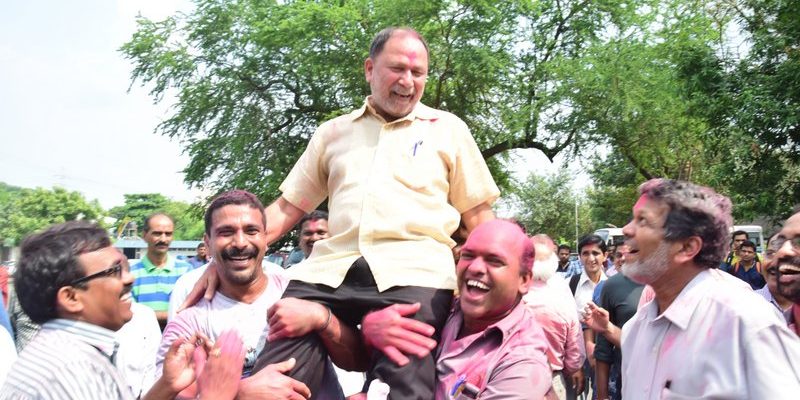 On November 11, 2016 Comrade Uday Mahale passed away at the age  of 61. He was the President of Siemens Worker’s Union (SWU) since 2015 prior to which he was the General Secretary for 28 years. He was closely involved with the labour movement for the past thirty-five years.

First elected in 1987, Com. Uday signed several settlements but strongly believed that unions should go beyond negotiating wages and bonus. He implemented several welfare schemes to provide housing, healthcare and insurance for workers during his long and illustrious tenure. He was instrumental in forming Siemens Employees Federation, of which he became the president in 2015.

Com. Uday was a staunch supporter of industrial democracy and industrial harmony and championed conflict resolution through worker-management dialogue. He was also vociferous in his support to internal trade unions and believed that only workers should be in leadership positions in unions. He was an ardent believer of worker’s rights and dignity and believed that building and maintaining

strong industrial relations was imperative to building a better and more equitable world. Chief among his plans for the future was to unionise contract labour and bring them into the fold. He believed that in an era of ever shrinking unionized workforce, this was the way ahead for the larger labour movement. On a personal front, he was a dedicated marathoner.

Siemens Worker’s Union organised a special meeting on November 20, 2016 in his memory. The meeting was attended by people who have had an association with Com. Uday over the years and included representatives from the Siemens management, union colleagues from ABB, Crompton, Shramik Ekta Mahasangh, Dock Workers Union and members of Siemens Workers Union, both current and retired. SWU started off the event with a short clip of Com. Uday speaking about the International Frameworks Agreement (IFA). One of his many plans was the implementation of the IFA in Siemens factories across India and around the world. Representatives of other unions, the management of Siemens, lawyers and activists spoke about their association with Com. Uday and highlighted his work, his plans, his dreams, and his life.

Comrade Mahale is survived not only by his immediate family, his wife Jaya, son Ajeet and mother Rukmini, but also by workers at Siemens and the larger fraternity fighting for worker’s rights.